The String Circle is a project by

under the patronage of 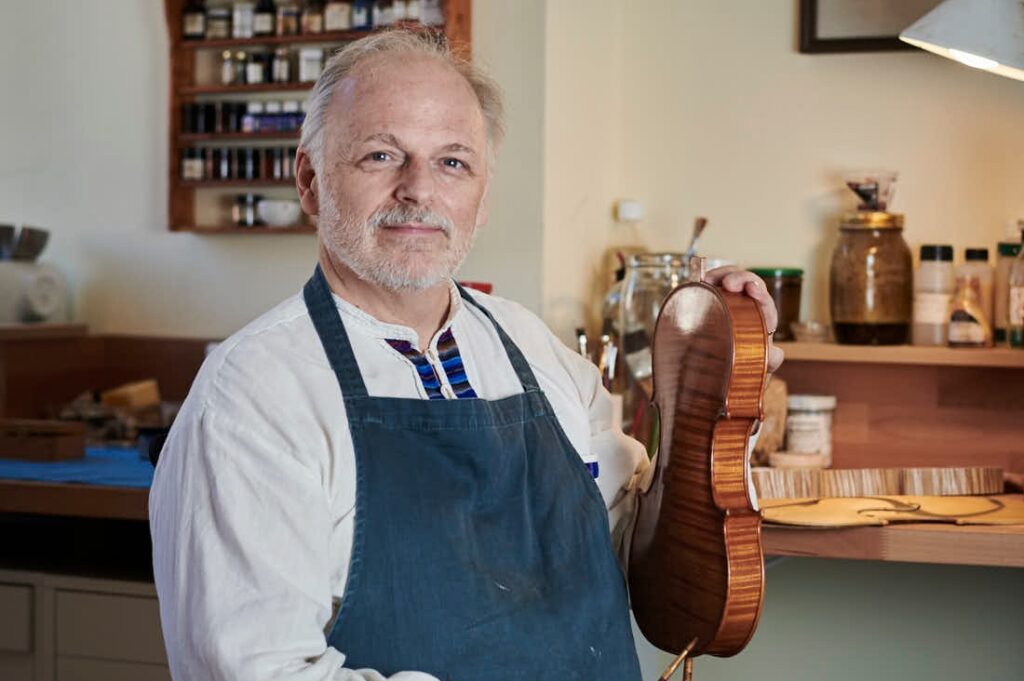 Widely respected as one of today’s leading violinmakers, Gregg Alf played the violin as a child and studied instrument making in Italy for eight years, graduating in 1980 from the International Violinmaking school in Cremona. He returned to the USA with his friend Joseph Curtin and in 1984 founded the violinmaking studios of Curtin & Alf.

From that collaboration grew Alf Studios, which continues to this day in Ann Arbor, Michigan. His work has won a full range of awards and gold medals at international competitions and in 1982, the Violin Society of America’s top honorary designation, “Hors Concours”.

Gregg’s instruments appear on-stage in many of today’s leading orchestras, in new recordings and in concert with some of the most respected soloists of our time. His personal style has evolved through an in-depth study of the rare Italian instruments that pass through his shop combined with a careful and ongoing dialogue with the concert artists who own them. His work was presented at the Ole Bull celebration in Bergen Norway and is in loan collections offered by the Royal Academy of London, the Amati Foundation, Dextra Musica and the Maestro Foundation.

While honouring the Italian traditions of the past, Gregg looks to science and innovation for guidance and inspiration to make even better instruments in the future. As founder and artistic director of the Amiata Summit, he believes that promoting a climate of openness between his colleagues and encouraging original models that address the future of violinmaking, while honouring its past, are keys to progress in the field. Gregg is a member of The American Federation of Violin and Bow Makers, the International Entente of Violinmakers EILA, and as a violinmaker, is exceptionally open about sharing his techniques.
He has served on the faculty of the Oberlin Violinmaking Workshops, on the Scientific Committee of the Cremona Museo del Violino, and as a lecturer and guest examiner at violinmaking schools around the world.
Many of his apprentices have gone on to distinguished careers of their own. In recent years, Gregg has served as a workmanship judge for VSA Violinmaking Competitions, The Cremona Triennale, the First International Violinmaking Competition in China, among others and curated several important exhibitions including the 2016 Messiah Stradivari Exhibition in Cremona and the Tokyo Stradivarius
Festival, 2018.
Gregg now lives with his family in the historic centre of Venice, Italy.

This cello is made from a Giuseppe Guarneri filius Andreae model. The two-piece back is cut on the slab from Italian Poplar. The ribs are made of similar Italilan Poplar. The scroll and neck are made of similar maple. The scroll has been grafted to the neck. The two-piece top is of medium broad somewhat irregular spruce which broadens toward the flanks. The cello is finished with an orange-brown varnish on a golden ground and has been antiqued. 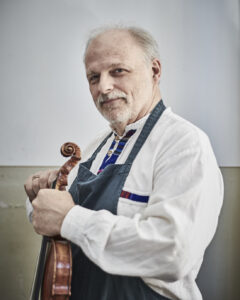 WOULD YOU LIKE TO RECEIVE MORE INFORMATION ON GREGG ALF AND HIS INSTRUMENTS?

Discover all the artisans in our network and their instruments